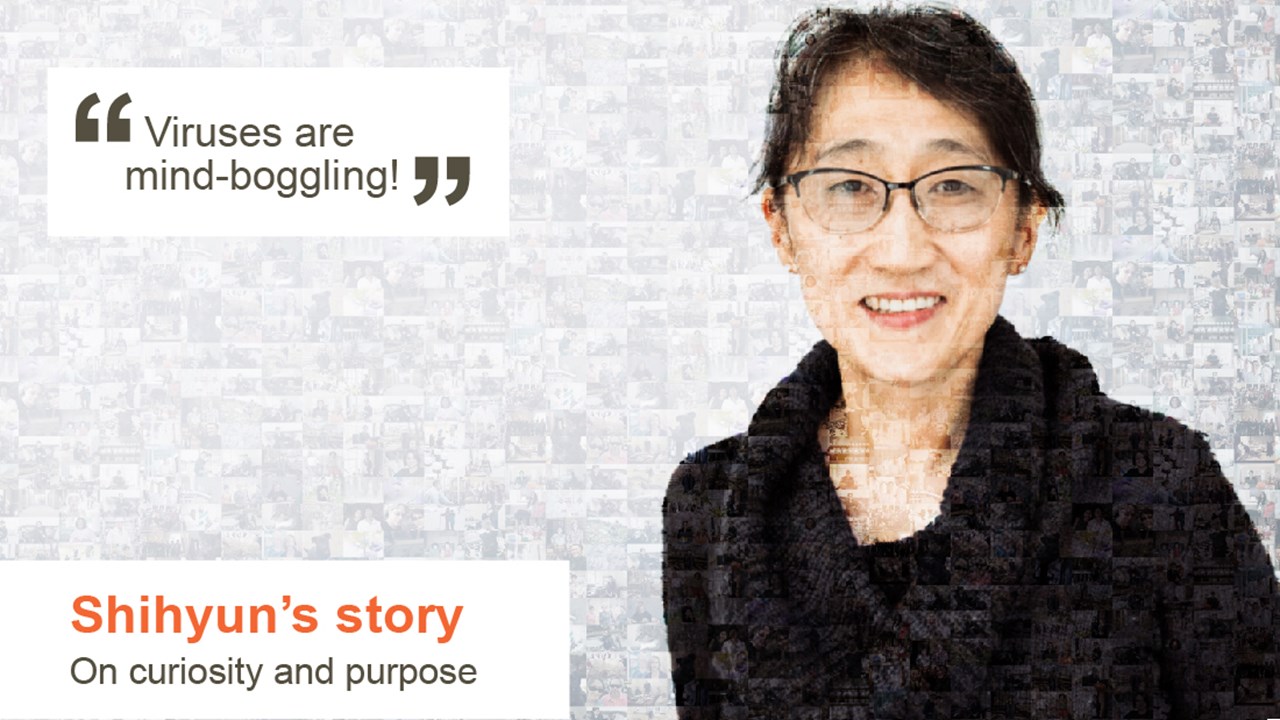 “Viruses are mind-boggling!” Shihyun You, Senior Director, Infectious Diseases Research Unit, on her endless fascination with living things, the joy of scientific discovery with world leading scientists, and why a complicated family history with the hepatitis B virus helped her embrace GSKs smart risk-taking approach to finding a potential cure.

When I was a child, hepatitis B was still endemic where I grew up in Seoul, South Korea. Now they have vaccines, but in those days many were infected. It’s mostly a self-limiting, acute infection in adults, but for children whose immune systems are still developing it can lie dormant, not causing symptoms until many years later – about 90% of cases in children develop chronic hepatitis B virus (HBV) infection. I was one of the 10% who did not, which means my immune system somehow naturally produced antibodies to get rid of the virus. My brothers weren’t so lucky – both of them were infected. At the time I was too young to understand the consequences, but now I am very grateful that I was spared. I think the question of why and how my body did that and my brothers’ couldn’t is always in the back of my mind.

We lost my older brother, a talented animation artist, in late March 2001 after complications following a liver transplant due to decompensated cirrhosis. My younger brother is under long term treatment which works well to prevent things getting worse, but it isn’t a cure. At the moment the only option for hepatitis B patients is to take medication for life. I didn’t begin my life in science to work on this disease, but now I do feel I have a purpose, to try and find a cure which might help my brother and all the other people out there with chronic hepatitis B. It’s a very complicated disease, so we don’t really imagine that one treatment option or drug will cure it. Likely it will be some combination of multiple mechanisms. Within GSK I’m responsible for thinking strategically about what areas of biology it makes sense to explore, and how we can validate those combinations.

I was lucky that growing up as a girl in South Korea, my family were always supportive of my ambitions. My grandma was pretty old fashioned culturally, always making sure my brothers had the best to eat, that sort of thing, but my mom definitely encouraged me to do what I wanted to do, because she hadn’t had the chance in her generation. Considering that probably back then what would have been expected of me was to get married and start a family, it’s pretty amazing that my parents were so behind me moving abroad to pursue my career.

At certain times of life, having support is so important. I remember one of my colleagues at GSK when I first started as a biology leader was so good at listening to everyone. In meetings he always made a point of asking my opinion and providing me a platform to speak. I try to do the same thing for my teams. Whoever they are, I want them to know someone is listening.

I started specialising in molecular biology while I was still in South Korea; it was such an exciting field with genetic engineering emerging and I realised if I wanted to learn more I needed to move abroad. I moved to the US to do a PhD, and during that time I happened to rotate into the virology lab, where they were trying to answer a question about Dengue virus. That was the first time I worked on viruses, and it was really mind-boggling. They’re like aliens, really! Working in that lab was where I had my first experience of the joy of scientific discovery. I had an idea, and I did an experiment – back then we used radio-isotopes so I was putting my X-ray film into the developer in the darkroom and waiting to see what came out. I remember turning on the light and seeing all these bands on the film; it was such an amazing feeling of ‘yes, it worked!’, and definitely a little addictive!

After that, for my post-doctoral training, I worked with Professor Charlie Rice, who won the Nobel prize in 2020 for his work on hepatitis C. The diseases have the same name but they’re really different, so knowledge on one doesn’t translate to the other, but working with high calibre scientists enabled me to learn so much. While I was there, I discovered a bit of artistic talent – putting together PowerPoint presentations in a graphic way to simplify and clarify complicated information. My older brother was an artist and my mom wanted to be a painter, and I really found my creative side in presenting scientific stories.

I’m looking forward to travelling when the world opens up again, enjoying some good food and good drink and exploring new places. I have been cooking a lot during the pandemic - I love getting everything prepared and putting together all the ingredients, following the method and seeing what comes out. My homemade lasagne bolognese took two days, but the look on everyone’s face when I brought it to the table made it all worthwhile. It’s a bit like running an experiment – it’s been several years since I was in the lab so maybe I’m missing it!

My husband and I are a good mix; he keeps me grounded because he’s rather spontaneous and laid back. He had testicular cancer in college and maybe having that surgery and experience so young changed his mindset. I understand that – soon after my brother’s funeral I did a skydive, which was totally out of character. I guess I was proving a point, but I won’t be doing anything like that again! I prefer hanging out at home with my furbabies. We have a dog and three cats - one of them is named Alex, after the main character of the animation movie my late brother worked on. I got him when I came back to the States right after the funeral and he’s 21 years old now. I think of my brother a lot, and at some moments it really strikes me how young he was when we lost him to chronic hepatitis B. That’s why I’ve made trying to help other people with the disease my goal.

I’m not a risky person – I’ll never jump out of a plane again! – but I’m not afraid of failure. If I have a question, I don’t worry about whether things might not work out, I need to know I’ve tried.

I think to be successful in science you have to be curious. Being open-minded and following a path can lead you to discover something new, even if it’s just the next question. I’ve learned to recognise when curiosity is leading me down a useful path; the key is keeping the end in mind. We are lucky now to have big data as well as experience to help us make those decisions, so it’s more like smart risk taking, making sure our curiosity is leading us to a situation where we can help the patient.

When I stop and think about it, everything in life is amazing. The human body we’re trying to help cure, these viruses we study. They are completely remarkable; so small they are just basically a few proteins. I think the world is endlessly fascinating. I just find myself looking around and thinking, ‘this is incredible, how did we get here?’