Professor Roger Abramino Levy is a former Adjunct Professor of Rheumatology who since 2018 has been a Global Medical Expert at GSK.

Professor Levy joined GSK to help improve the lives of even greater numbers of lupus patients through supporting research and education initiatives focusing on this extremely variable and challenging disease. He tells us why research into the area is so important, and why he has spent so much of his life dedicated to researching and treating lupus.

Looking for a better life for people with lupus

I first became interested in lupus when I was a medical student back in Rio de Janeiro in the 1980s. A friend’s sister was admitted to our hospital with a mysterious illness. She was very sick, requiring hospital treatment to cope with the effects of her own immune system attacking her. Then to our astonishment a few days later she would be apparently well again! This strange disease was called lupus and it seemed so unpredictable that I was very keen to learn more about it.

A lot of time has passed since then, but I am still as passionate as ever about better understanding lupus. That’s good, because there is still so much to learn…

Lupus is different for everyone

Systemic lupus erythematosus (SLE), commonly referred to as lupus, is an autoimmune disease – a disease in which the body’s immune system is hyper stimulated and stops tolerating itself, triggering inflammation that may cause damage in several organs. Lupus affects people in different ways, but the most common manifestations include fatigue, skin rashes, joint swelling and pain, kidney disease and consequently organ damage. Disability and early death are more frequent in lupus patients, so it is important to bring the disease under control as early as we can and reduce the cumulative dose of corticosteroids in order to minimise the damage as much as possible.

To do this we need to diagnose patients early, but this can be difficult partly because the clinical presentation is so variable with different people experiencing different symptoms. Some people say lupus is like a tree, with many subtypes which are like branches to the main trunk. It can also mimic other medical conditions, and there is no simple test you can do that will say; ‘Yes, this person has lupus.’ So, you need to look at the whole person and consider signs, symptoms, medical history, and also blood tests results. Unfortunately, it is common for people to wait three to five years before they are diagnosed, and tissue injury and irreversible damage can be caused by the disease during this time.

Tackling the challenges of clinical research in lupus

Developing effective well-tolerated treatments for lupus is extremely challenging. Symptoms can appear then disappear again without warning, which makes it very difficult to see whether new treatments are having the desired effect. Corticosteroids improve manifestations in the short term, however they are directly linked to accelerated development of damage if used for longer or at higher dosages. Also, as patients have such different experiences and manifestations of the disease they respond differently to medications. This makes it hard to track the effect of the study treatment in a clinical trial.

On top of this, trial participants will already be taking treatments that affect their immune system to control their disease. These will affect people in different ways, and you can be sure that it will influence the results. Finally, as lupus is so variable in its clinical presentation it is hard to know exactly what to look for in a study to see whether a potential treatment is working or not. Should you look at symptoms? Quality of life? Pain? Physician’s judgement? Or maybe something else, like a composite index?

How can we overcome these challenges? One way is to try and take more targeted approaches. We are working very hard to understand the varied underlying mechanisms behind the different types of lupus – the branches of the lupus tree. You may think ‘surely genetics plays a big role?’ Indeed, lupus can run in families and I myself have treated identical twins who both have lupus, but they had different manifestations. They live in the same house, eat the same food, share the same genes, but their lupus presentation is different. One twin mainly had skin and joint problems and the other had kidney disease. What can be driving this difference?

A lot of research is currently being done to understand these differences in clinical manifestations between lupus patients. Focusing on the science of the immune system and human genetics is helping us to accelerate the development of personalised medicines. We are looking at different biomarkers, which are molecules in the body that we can measured to give us an insight into a biological process or predict types and severity of disease manifestations within the body. For example, we can easily measure cholesterol objectively with a blood test, and we know that if the wrong type of cholesterol is too high this means that the person’s risk of having a heart attack or stroke is increased. In rheumatology we are often looking for indications that the immune system is not behaving like it should, that there is too much inflammation in the body or that certain types of white blood cells are congregating in a certain place, for example. 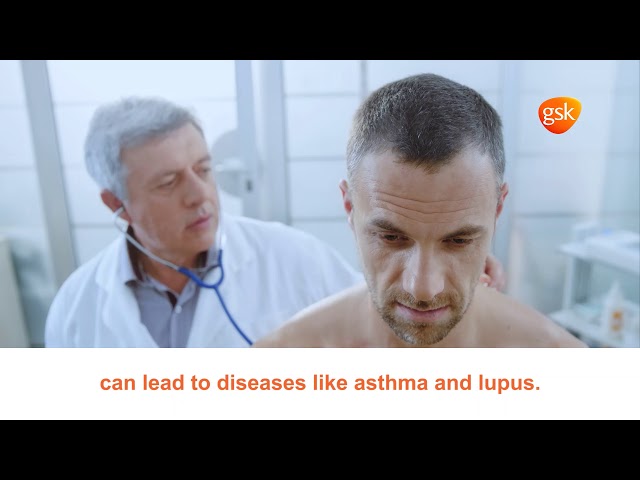 Unlocking the secrets of the immune system

What happens when your body's defence system turns on itself?

We hope that scientists will be able to discover new (and more precise) biomarkers that can enable us to identify different types of lupus manifestations and predict treatment response. This would be a great advance, help doctors diagnose lupus complications earlier and save a lot of unnecessary suffering for patients. Also, it could enable us to predict the course of an individual’s disease. This would allow us to know in advance the types of problems they are likely to have and to measure treatment response in reliable way.

Better biomarkers would also help us develop more treatments for lupus by solving some of the challenges we listed before. It would help us enrol patients in clinical trials who are more alike and who would therefore be more likely to respond to treatment in a similar way. This would mean we could enrol fewer patients and still be able to see if the treatment has an effect. It would also solve the problems of variable symptoms and not knowing what to look for, we could track a biomarker to see the effect our potential treatment has, thereby removing a lot of the uncertainty.

This has the potential of really making personalised care a reality for people with lupus. Imagine a world in which we can not only quickly diagnose a patient, but also swiftly categorise them into the correct disease subtype, have high confidence in what the natural course of their disease will be and be able to provide targeted treatment for their type of lupus before they have developed any organ damage. Well, we are not there yet, but we are very excited about this possibility and I hope that over the next decade we will see some real progress in this regard.

How do you test medicines in the real world?

Unravelling the mysteries of the human genome with functional genomics