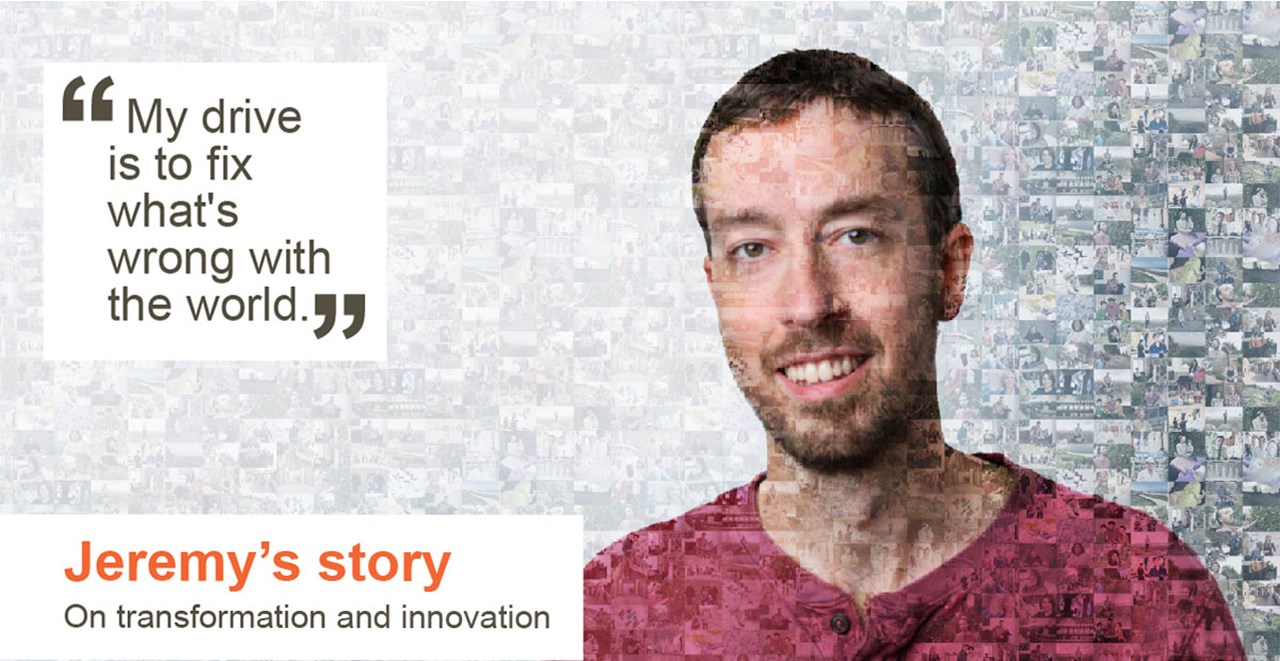 “My drive is to fix what’s wrong with the world.” Jeremy England, Senior Director, AI/ML Engineering describes how an eccentric orbit passing through biology, physics, religion and machine learning has brought him and his family to a lasting spiritual and professional home in Israel, and how his work using large datasets to predict the Achilles heel of individual cells has the potential to transform our strategy for fighting cancer.

My mother’s family were Polish Jews who survived the holocaust, escaping to the Soviet Union when the rest of their families were wiped out during the second world war. My mother was born in Poland after the war ended; her family escaped the Iron Curtain in 1957, became refugees in West Germany, then made their way to the United States, settling in Massachusetts.

I think a lot of Holocaust survivors shared a very intense desire to claw their way back and build a world that’s better than the one they lived through, along with a kind of idealism about living a life with meaning. Often I think the path to that meaning was through an obsession with education, knowledge and understanding. That was certainly a fire in my mother’s belly. I guess I was born into the right family when it came to curiosity – I loved dinosaurs at 4, black holes at 10 and just always wanted to know more!

I think a lot of us who are the grandchildren of those survivors carry that drive to fix what’s wrong with the world in some way. My sister is an associate professor of psychology, studying Alzheimers, and I’m really proud that I am working on something now with GSK which has a potential application with great general benefit to humanity.

The main project here in the AI-ML team Israel is to do with synthetic lethality, and this is where the work is really cutting edge. We’re looking at enormous amounts of data to try and predict how to make therapies that do no harm at all to healthy parts of the body, while being specifically and potently lethal to the cancerous parts. That is how we begin to develop a strategy for synthetic lethality.

Our aim is to analyse huge datasets from individual cells to identify potential new targets in terms of genes or other aspects of molecular cell biology to go after with pharmaceuticals. The idea is that, if we can find enough patterns in the data, we can pinpoint vulnerabilities in particular cancer cells and choose the right weapon in our arsenal to attack. If we can make it work, it has the potential to transform our strategy for fighting cancer.

Our biggest project is named after an ancient Jewish recipe for creating incense; it’s very specific about getting the ingredients exactly right in perfect combination, which felt right for what we are trying to do. The difficulty with looking at individual genes is the numbers are so huge - even if you just wanted to look at different combinations of, say, three genes being on or off, you’re talking about millions of experiments, which we haven’t got time or resource for. That’s why  we need machine learning, to predict which are the best next experiments both to give us the information we need to make the system better and to discover the synthetic combinations for those Achilles heels in cancer cells. That means finding all the combinations of manipulations of gene activity that might be effective at targeting some cells and leaving others unharmed. It’s a challenging problem, but we have a lot of talent in the team to tackle it.

My path has been a bit of an eccentric orbit. I started off in biochemistry, did a PhD in physics, then started my lab at MIT as a theoretical biophysicist looking at how life emerged. That brought me into machine learning, because we were trying to model what happened with different combinations of particles. And then I got pulled back towards biology and came to GSK in 2019, carrying with me a new enthusiasm for machine learning and really excited about applying it to biological problems.

This is the best possible thing I could have done, both in terms of moving into more applied biomedical sciences and for my family. It’s been such great timing, because I get to bring in perspectives from other fields and try to really do something innovative and different. I’m learning more every month than I have for years.

While I was at MIT, the novelist Dan Brown read about my work and he asked me out to lunch one day to tell me he had a character in his novel ‘Origin’ that had my name and did the same work. I actually wrote a piece in the Wall Street Journal to clarify something important - that character was unwilling to think about the broader implications of his work, and I clearly don’t feel that way! After that I wrote my own book, ‘Every Life is on Fire’, about the boundary between life and non-life, and I brought some poetry and passages from religious texts into it, to show my belief that all scientific inquiries carry along with them a set of philosophical questions and implications that extend outside the realm of science.

I first visited Israel while I was studying at Oxford. My identity as a scientist was a big part of how I thought of myself and who I was, but I was reaching the point where trying to understand the world only through science was like taking a black and white photograph of a rainbow; highly accurate in some ways, but missing some of the aspects that define it and make it real. I became fascinated with the very rich and enthralling intellectual pursuit of studying Judaism. I had a very visceral reason to love it, because of my family history, and I got very drawn in, so that was where I decided I wanted to plant my spiritual feet.

While I was in Oxford I was influenced by the writings of Jonathan Sacks, who was the Chief Rabbi of the UK at that time; that’s part of why I chose to become an ordained orthodox rabbi. I really enjoy finding meaning from our religious texts involving science and discovery, and teaching them in our community.

My wife is a scientist as well - she studied Biology and we were at MIT together. We always dreamed of moving to Israel with our three sons, so we could immerse ourselves in the Jewish community and all the rites and practices that go along with that.

Moving to Israel with GSK feels like a hand in glove fit with the work that needed to be done and the place I wanted to be with my family. It really is one of those instances where two different aspects of my life worked together in beautiful concert, and I just feel so grateful that GSK has been a part of helping that to happen. Israel is a major talent center, both in biotechnology and machine learning, so there was a very good strategic reason to start to build this team here; they’re GSK’s first R&D group in Israel and are already doing outstanding work. That makes me really proud.